With Fans Like These
A Christmas Mikey is the nineteenth episode of the first season of Kappa Mikey.

The episode began with the filming of a snowy episode of LilyMu. The episode started with Guano running from Gonard. Gonard fires a laser, and burned Guano's tail. Mikey then arrives, and drops a later from their jet to allow Guano to climb up. However while climbing, Gonard grabs hold of Guano. He then shoots the jet, causing it to crash into a building. This allowed the latter to become a set of monkey bars that Mikey tried to use to get to Gonard. However, Gonard starts shooting another laser and destroyed most of the latter, causing it to become two ropes.

After finishing the shooting of the episode, Guano is surprised that they were able o successfully shoot the last episode of the season. The cast celebrate being able to do so, as Lily comments on how Mikey "didn't destroy the set this time." After she said that, Mikey leans against a camera, which then tips over and launches Gonard into the air. This makes him and his sandwich land on Lily. The Kappa Mikey backdrop then falls and breaks on Mikey's head. Mikey then apologizes for destroying the set, but Gauno tells him not to worry and says that they can destroy whatever they want. Gauno then runs over to a giant robot, and kicks it in its foot. The robot then jumps on Gauno.

Mitsuki then reminds them not to wreck the place to much, because of a Christmas party they have planned. Lily then goes over a rule list that says that Mikey cannot come to the party. Yet Lily gives in after Mitsuki chimes in. Mikey then talks about how his contract is in need of renewal, and what he is going to ask for from Ozu for his renewal. Gonard then mentions that Ozu always has a case of the grumpies during the holidays.

Ozu then walks into the room, and Yes Man is wearing a Christmas tree outfit. This enrages Ozu, so he stomps on Yes Man's foot, causing him to cry out in pain. Ozu then takes a stocking, and shoves it into Yes Man's mouth. Mikey then comments that this would be a good time to confront Ozu with some unreasonable demands.

Mikey goes into Ozu's office, where Ozu is silently staring out the window. Mikey starts his presentation by stating what he needs and what Ozu needs. Ozu continues to ignore Mikey, so Mikey then tries to figure out what has Ozu so grumpy. This makes Ozu yell at Mikey to get out of his office. Mikey asks about his contract again and Ozu tells Mikey he is not a great actor and that he was just in the right place at the right time. This saddens Mikey, and he leaves Ozu's office.

While Ozu is in his office, he can hear Mitsuki and Guano singing Christmas carols outside. He then breaks the glass on his hose, and shoots it from the roof at them. He is then confronted by the Ghost of Japanese Christmas Past. Ozu then asks for mercy, but when the ghost comes to close he starts attacking it with his calculator. He then tells the spirit to "Get out before I make you regret the day you died." The ghost then tells Ozu of his mission to teach Ozu the true meaning of Christmas. The ghost then tells Ozu that he hasn't always been this way, and takes him on a trip through his past. They arrive in an old place that Ozu recognizes.

Back in LilyMu Towers, the gang is knocking on Mikey's door trying to talk to him. However, Mikey is lying on the floor wallowing in sadness. Gonard then promises to capture him a monkey assistant, but Mikey doesn't respond to them. Mikey then decides to write a note and leave.

As he is walking, he gets so into his anger that he doesn't pay attention to where he is going and runs into someone. This causes him to drop his suitcase, and have its contents fall onto the ground. The man he walked into helps him pick up his stuff. The man introduces himself as Laurence, and demonstrates a lot of knowledge on Mikey. When Mikey asks him about this, he admits that he is Mikey's guardian angel. Mikey mishears him as a "Partying angel", and so Laurence corrects him.

Ozu goes into details about how he used grew up there. This includes how he used to throw objects through his fence whenever he got angry. Ozu then spots himself preparing to leave his wife Kiyoko and his son for the city. Before he leaves, he promises that he will be back for Christmas and gives his son a teddy bear. However, when Christmas comes around and Ozu returns, his house was destroyed and his family was no where to be found. He then throws his bag of gifts through the fence, and the current Ozu and the ghost return to Ozu's office.

Mikey is still having a hard time accepting that Laurence is his guardian angel. Laurence then explains that he wants to help Mikey, but Mikey says he just wants to go home and that he wishes that he had never gone to Japan. Laurence grants his wish. Mikey still has a hard time believing him.

Mikey quickly locates Guano, who has become a chimney-sweep who speaks in a British accent. Mikey then asks Laurence why Guano did not recognize him and he explained that since he never came to Japan, Guano never met him. The show had failed without him and so, Guano became unemployed.

Back in Ozu's office, the Ghost of Christmas Present was amazed at how sad Ozu's past was. They had lost their faith in Christmas. Then Yes Man comes in dancing in an elf costume, and Ozu breaks his other foot. The Ghosts then plan to ruin the Christmas party with Ozu.

Because the show was cancelled while filming and no one said "Cut!", Gonard had never stopped acting. Gonard was terrorizing citizens of Tokyo, and when he came up to Mikey he told him where Guano was, and he went after him.

After the show, Lily had gained weight and became a mother. She married Yoshi, and had a few street urchins follow her home.

While celebrating, the Ghost of Japanese Christmas Future arrives. He asks what Terry and James (The ghosts) are doing by helping Ozu ruin the Christmas party. They explain that they hate Christmas now because of something sad that happened in Ozu's past. The Ghost of Christmas Future then reminds them that they are Christmas ghosts, and they apologize. However, Ozu tells them not to listen to the other ghost.

The Ghost of Japanese Christmas Future then tries to talk to Ozu, but Ozu says that he hates it. The Ghost then tells Ozu that he should love it most of all because that is the day he will see his son again. Ozu then realizes that Christmas is a joyous time, and thanks the ghosts. The other ghost decide to devote their lives to showing others just how great Christmas is, and the Ghost of Christmas Future decides to fire both of them.

Mikey and Laurence then go to Mitsuki's house, a large mansion. After LilyMu failed, she had become the biggest star in Tokyo. Her fame was short lived however. Mitsuki never accepted that the public no longer loved her. She had become stuck in another world, and was clueless of the world around her, similar to actress Theda Bara with the end of the silent film era in Hollywood.

After this, Mikey realizes that he likes being in LilyMu and that he likes his friends. He then begs to go back, and his wish is granted.

Mikey then runs back to LilyMu Towers to get to the Christmas party. When he arrives, he is greeted by his friends who were surprised that he showed up. Mikey then hugs each of them and says how happy he is that they aren't what they could have been. Mikey then exclaims how amazing the party is, and Misuki tells him who paid for it.

Ozu is now walking around the party giving gifts to people. For Lily, he gives her a framed picture of herself. For Gonard, he gives him that toy truck that he has had his eye on. Yes Man then arrives, and Ozu is nice to him, so Yes Man jumps onto Ozu's shoulders in glee. For Mikey, Ozu gives him a new contract. Ozu also admits that what he had said earlier was wrong, and that Mikey was more than just a contest winner.

Mikey and Mitsuki then end up meeting under the mistletoe, and kiss. Guano then talks in private with Ozu, asking if the story was real. Ozu then confirms it, and Guano opens up the jewel in his stomach and pulls out a stuffed bear. Ozu is shocked by this. Guano then removes the head part of his "costume" and gives Ozu a hug (giving the answer that Guano was Ozu's son). 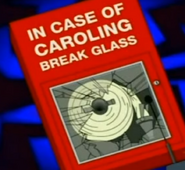 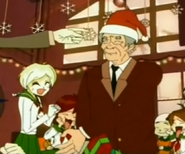 Add a photo to this gallery
Retrieved from "https://kappamikey.fandom.com/wiki/A_Christmas_Mikey?oldid=8414"
Community content is available under CC-BY-SA unless otherwise noted.